As a CEX, one of the primary feature sets that OKEx was missing was the ability to provide customers a way to track and review their PnL. Customers were either ignoring their PnL and/or total asset value, or they were sufficiently savvy enough to maintain an spreadsheet of sorts that helped them track their investments. 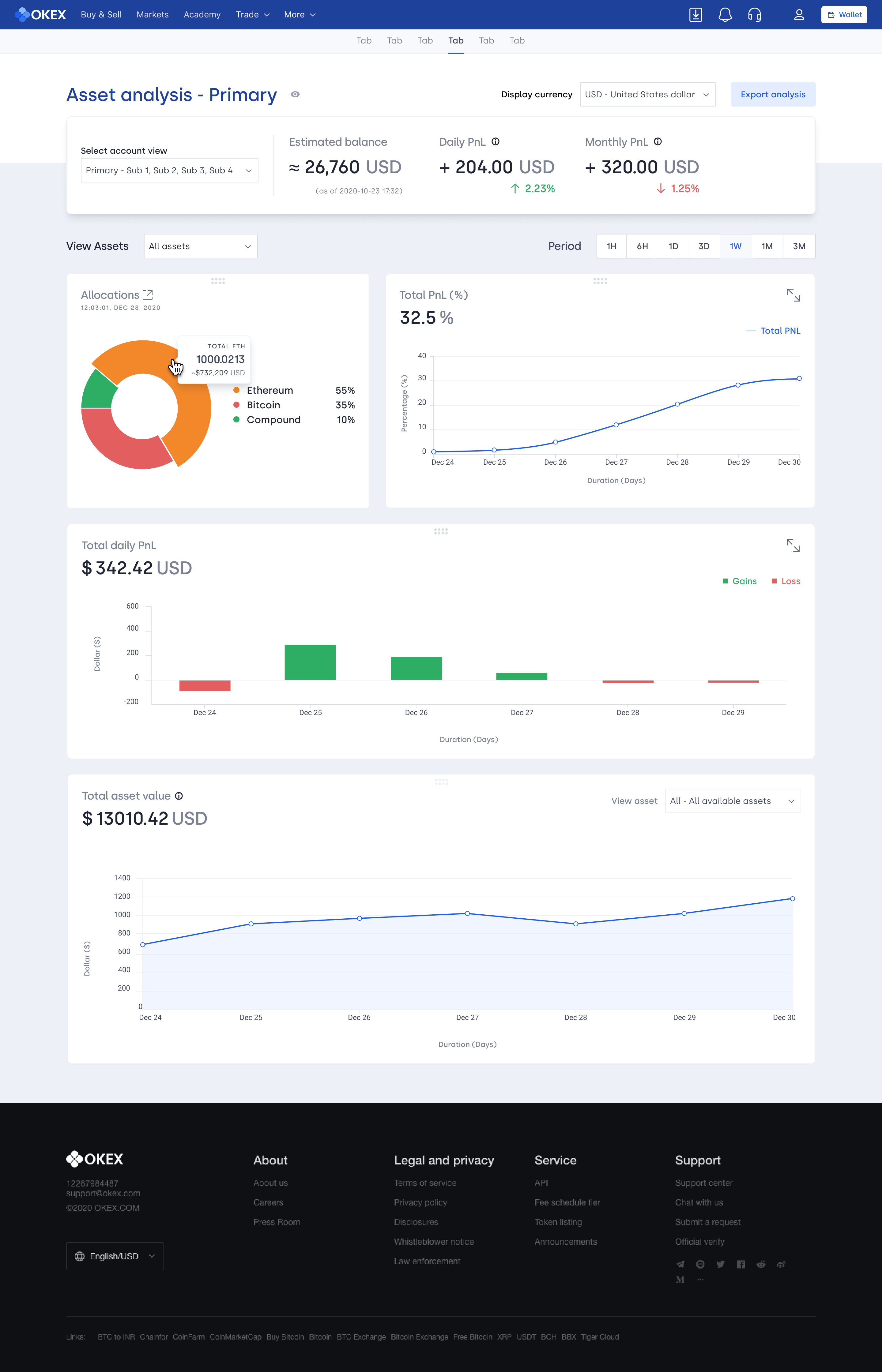 With other players already providing such a feature, there was no shortage of reference to make an informed competitive analysis. The real question in our minds was, how did people think about it actually? So we set out to test out an early set of screens by using UserTesting.com and fielded some responses that helped confirm an MVP launch and a sets of features that could be considered as part of our roadmap.

We received some pretty good insights from those tests as the testing audience was a mixture of individuals with at least some experience from the traditional finance world. 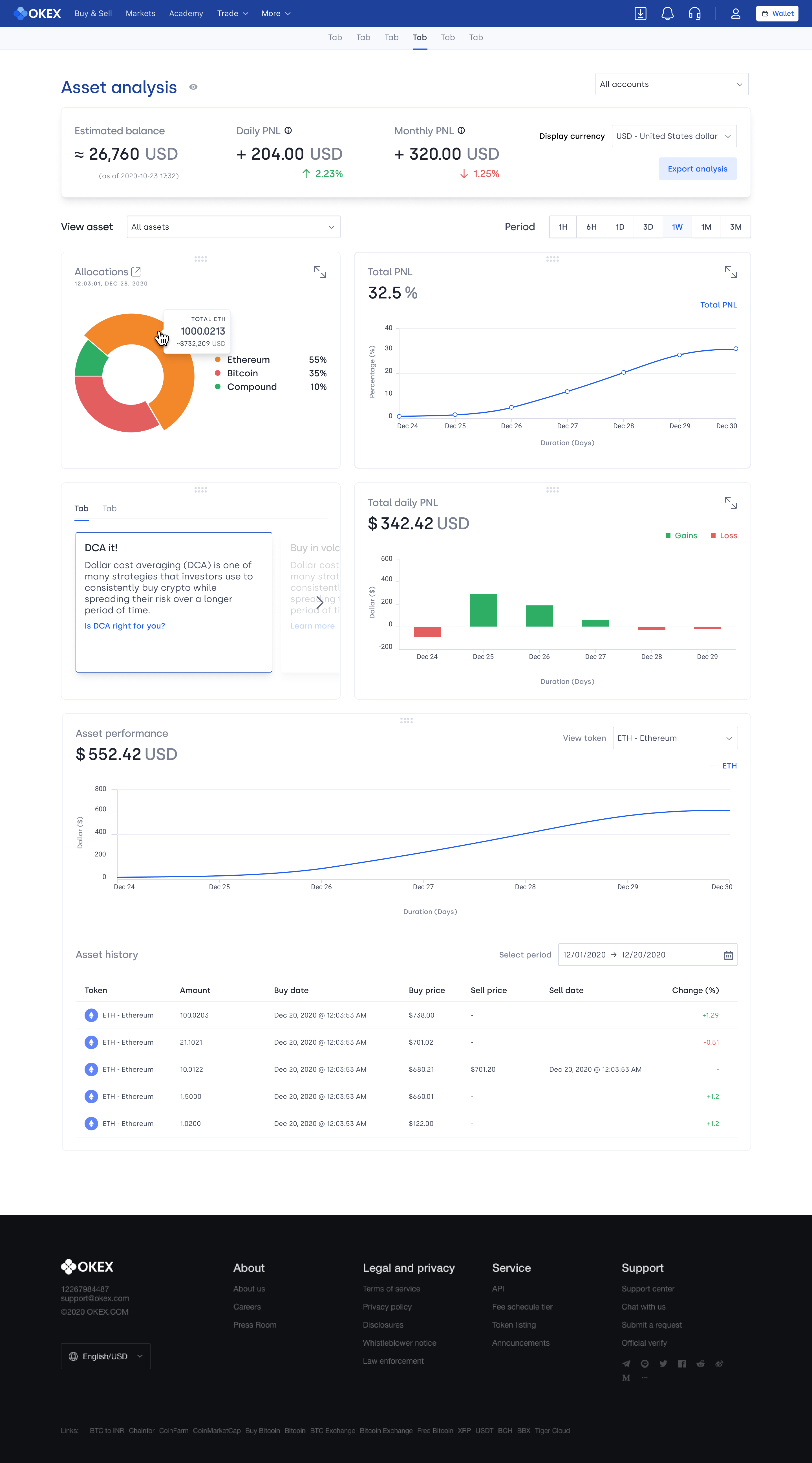 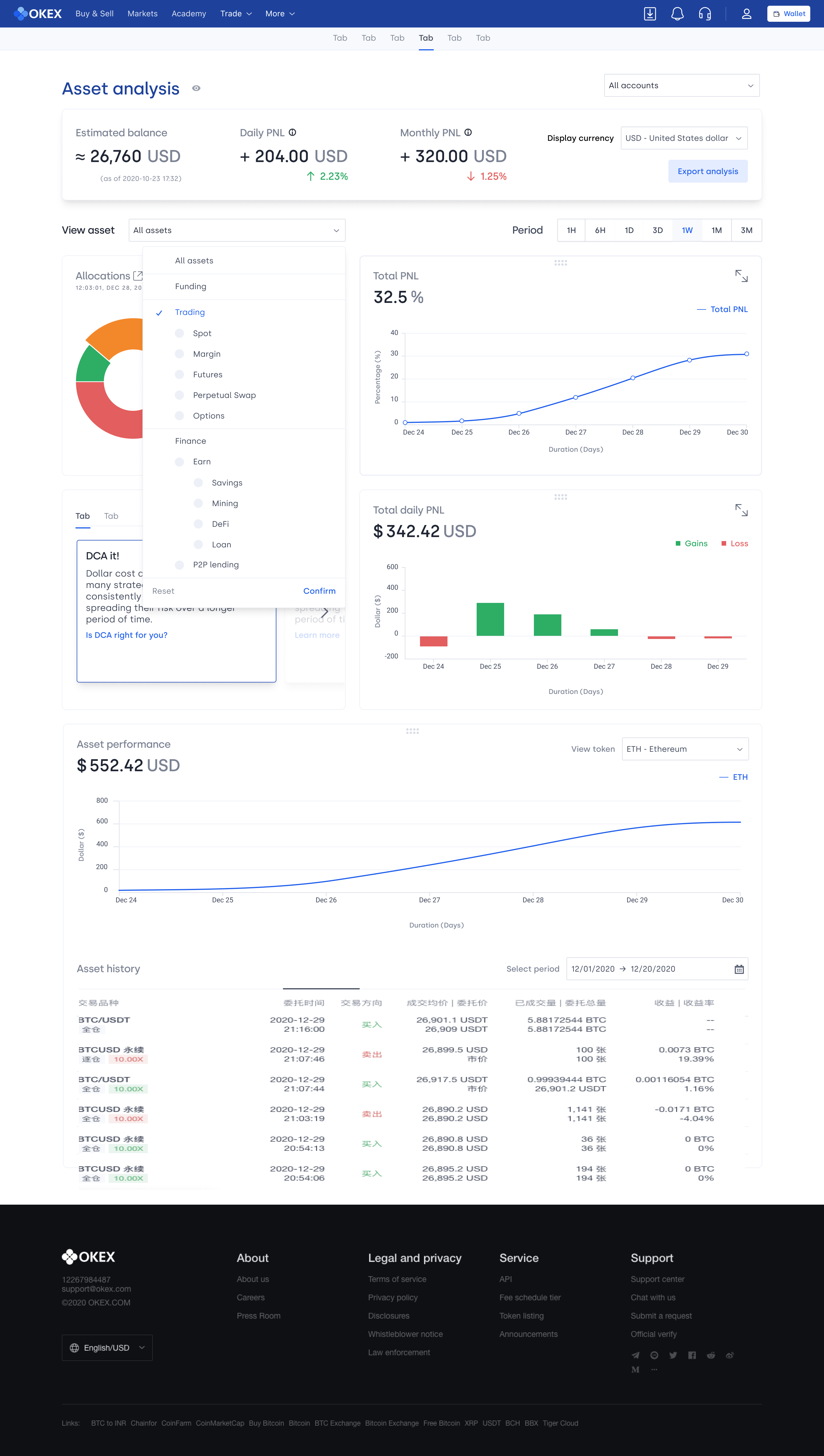 Once we had a clearer picture of the elements that users resonated with, we ended up stripping out features even further due to some technical challenges. Our Unified Account feature, while being an industry first, posed additional requirements that meant that data needed to be clearly defined into their respective instruments such as futures, or options when being pulled out for display. The complexity of accounting for this meant that some features needed to be simplified and put into a backlog for further investigation. 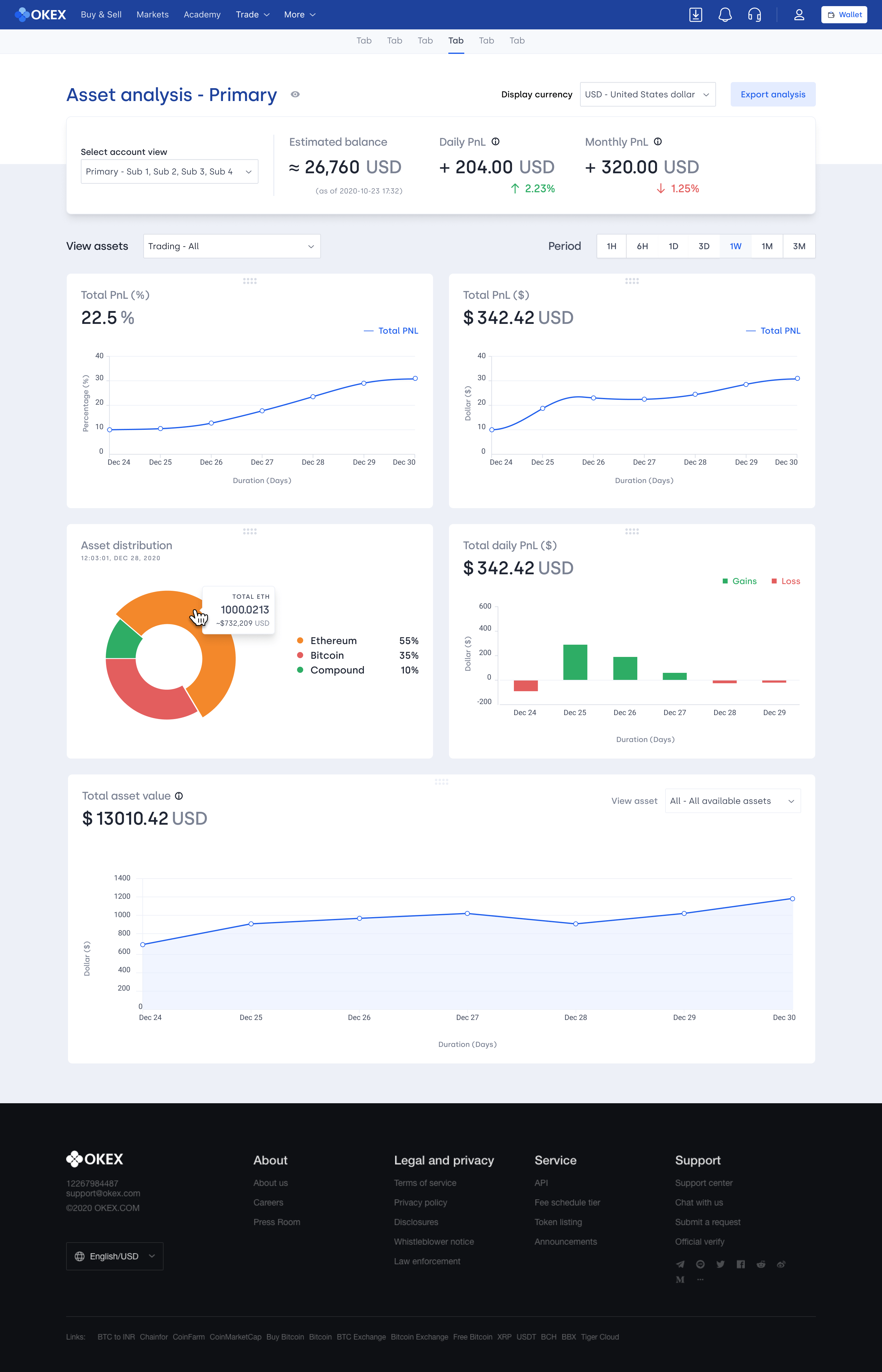 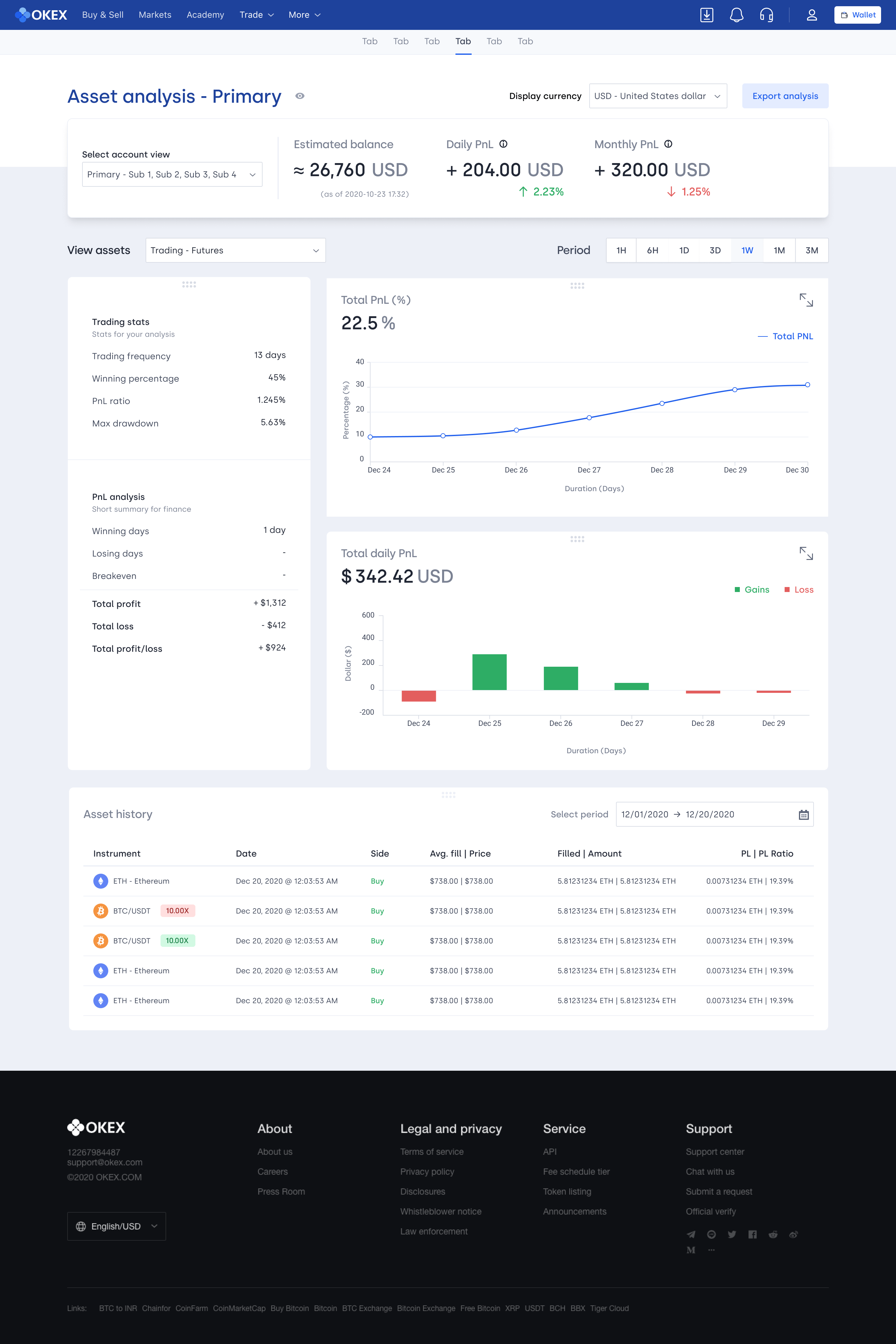 The project started off with a focus on the web, but at the same time, the requirement was to release an app version as well that supported all the features and more from the web. Due to the nature of the app, and it's ecosystem linked to social aspects; one of the major differences within the app was to be able to share your PnL and Asset allocation for example to your friends and/or followers. A particular type of audience was targeted towards KOL's in China. They both represented larger account holders and the potential to help onboard new customers.

Launching the asset analysis feature was a great experience, both as a crypto investor and as a designer. I'm absolutely amazed by the talent of our colleagues responsible for coming up with all the calculations and algorithms that support the display of the required information. Despite that, I still haven't fully grasped the concept of how to achieve that, but I definitely have found an appreciation for it. The goal to strive for now is to bring additional supportive features that help new users potentially contextualize the data in ways that support their investment decisions.